After almost 4 years of running D&D almost every week, my big campaign concluded recently. This week marked our retrospective, and the release of several relics of the campaign. One in particular was the campaign repo - previously described as my foaming campaign brain. This is a brief post about the setup, and discovered pros/cons associated with it.

Campaign first. We held 126 sessions about the campaign over 3.5 years (i.e. 36 per 12 months) as a remarkably consistent group (even after the pandemic hit and we moved remote).

Tooling also moved on; discord + Avreae (dndbeyond character + dice integration), rhythm for music (got DMCA’d and replaced by jmusicbot), owlbear.rodeo for interactive maps, 5e.tools for quick spell/item/monster searches and more. A lot easier to run with your main computer in front of you.

We could also record with OBS. So in fact, from the pandemic on, I started gathering episodes in an unlisted youtube playlist. Mainly as a reference, but also a memento later, for when it was over.

Inlining an external embed here to the wrap-up episode below.

This could be interesting if you want to cross reference with navigation in the brain / want to see how the tools fit together (map top left, discord dice bot bottom left), or you were a previous player (I don’t assume it would be super interesting to anyone else).

It’s also the only episode where the DM is relieved throughout the entire episode (because we managed to finish the campaign and they didn’t all wipe 16 levels in).

Anyway. Onto the notes.

I had started to use foam as a note taking tool in 2020. Mostly because of my familiarity with Markdown, but also the avoidance of vendor lock-in. Go read foaming campaign brain for more reasons behind this and how it works.

It’s very similar to obsidian, and most of the general advice for it applies.

The structure is just one enormous docs folder with markdown documents that is haphazardly grouped into folders:

These refer to either collections of notes that were close in time/space across the campaign, or special sets of notes like pcs, npcs, factions, and dm notes and rules.

The documents in these folders cross-link with various markdown plugins in VS Code (using wiki syntax). Users could clone and open the campaign repo with VS Code, install plugins, and you would get my experience, but this is a bit awkward.

I couldn’t just give people a link to things in the docs (e.g. goatweaver) because you’ll notice none of the wikilinks work. So we needed a webpage conversion.

Thanks to this template repo, it was reasonable easy to glue together mkdocs with the mkdocs-material theme. The result is this: 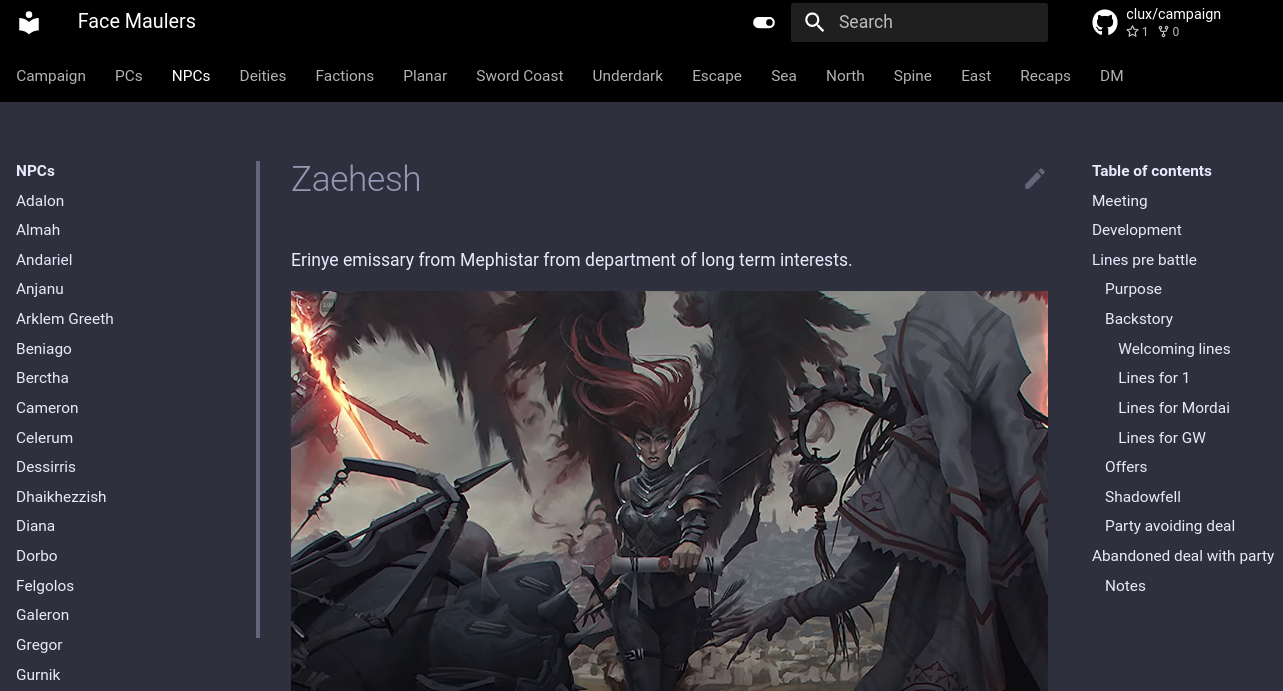 Folders become tabs, files becomes entries on the left side, and TOC is generated from headers on the right. Images are rendered from disk (as in markdown preview), cross-links work, and it would have ended up looking super professional had it not been for the myriad of TODOs buried in every document.

You can view the resulting static website at your leisure, but again, this is not going to be very interesting for anyone except the players and other DMs.

It was very nice process to DM with code in front of me. Definitely much better than the original OneNote setup that was periodically down or slow to respond. Knowing how to search, and cycle through tabs, and search within docs (or use rg in the docs folder) made it very easy to find anything quickly (no matter how deeply buried it ended up).

Your mileage may vary on this point, but if you know how to use a code editor, you’ll always end up with a more powerful way to navigate than whatever features that eventually make it into notion et al.

It took me about one day to reorganise the repo in a way that it worked with mkdocs. The process was basically:

The mkdocs-material docs in general were fantastic. Live preview of the features from their dogfooding setup. While I am confident an approximation exists with hugo, the features and quality here went far beyond anything I have seen in this space:

It made the outcome very attractive looking. In fact, it’s so nice that it might even replace the rust mdbook tool as a default simple static markdown web page for me.

(.. well. Maybe anyway. The python ecosystem still leaves a lot to be desired.)

Basically, a quick Ctrl-Shift-P in code, ask foam to create my preferred note (by hijacking the daily note setup for this), and it fills in the basics.

This file would serve as the “last we left off” at the start of each session, plus notes and TODOs for myself.

The paste-image plugin was pretty easy for capturing images and associating it quickly with the document. I would have preferred a drag and drop (when it could have worked), but ultimately bound a button in my desktop environment to do quickly draw a rectangle on my screen and shunt its contents to my clipboard (which then could be pasted from the plugin without going through a temporary file).

Throughout half their release history, nothing major broke on my end as plugins upgraded.

The most notable upgrade I noticed was the complete revamp of the graph view with new selection features: 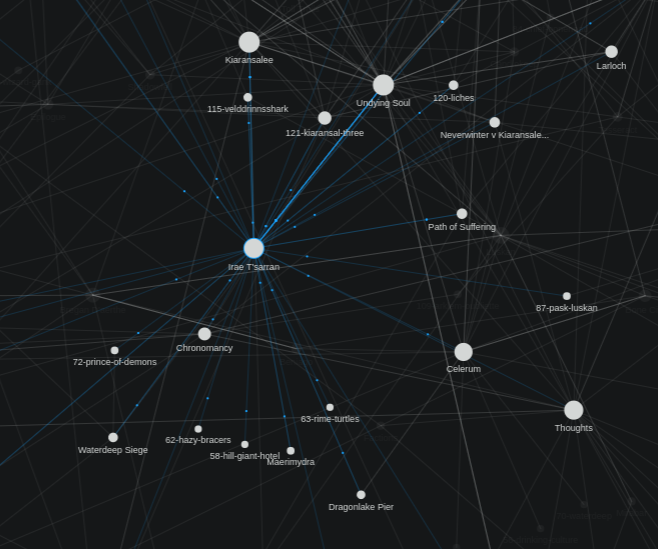 However, one minor snag in one upgrade was hiding the recaps from the graph view. EDIT 2023 workaround found.

Foam struggled with doing file renames (because backlinks were not updated). This was worked around to some extent thanks to mkdocs telling me about the broken links (but this was after adding the web page element).

EDIT: Have commented out this part in 2023 because this issue was resolved in foam.

My recaps folder has two digits prefixes on every note. This was fine in my file viewer + vs code, but not in mkdocs-material which sorted the entries lexicographically. Renaming would have to be done with sed or some other bulk search/replace tool.

This meant we basically had to take the folder contents and manually arrange them. This wasn’t too annoying, as we could just copy the output from fd .md . in the docs folder, and it was nice to be able to customize sorting anyway.

If you want to release a DM brain (with all your plans and secrets) from your campaing, you are more or less saying that this world over. This was ok for us, it’s been almost 4 years, and it’s not particularly original (forgotten realms, and stolen content everywhere). If you wanted to do a Mercer style campaign procession where each season is set in the same world different area, then this process becomes difficult.

If you have a team of software people familiar with an editor you could have a player brain type thing that you could reference from the DM brain potentially. But if you have their level of viewers or players dedicated enough to basically write a wiki for your campaign, maybe you have bigger problems.

There maybe some way of exporting the graph into a json blob and importing it in a separate page for users to browse (like a sitemap). But given how much graph has changed and is going to change, plus my impatience for real web development made this a non-starter.

Foam worked really well for this type of scoped project. I actually think that this type of brain would also work well for the players (if you have an engineer or two to manage it as notes) because they benefit much more from the website searchability, and you don’t run into the last problem about world secrets.

Lacking that, I will probably carry on with this setup for any similar ttrpg setup. Most of the negatives listed above are a bit nitpicky (EDIT: and resolved now), and are generally not that problematic. Plus, I now have a better idea of what structures work (pcs, npcs, factions, deities, recaps were perfect fits for their own folders), what information ought to go where, and how deep to go.

EDIT 2023: The rename problem is resolved, and I am using this for my main brain as well now.

Considering the standard open source software tradeoff is often between:

Foam does not deviate too far from this. It’s good, and it can become great.

..and you have VS Code on your side to help tilt the tradeoff