After 2 years of running a D&D campaign almost every week, my note taking setup reached several breaking points. If you’re using OneNote or another online managed system for tracking notes/cities/npcs/pcs/events, but know how to use programmers tools like git and code; boy are there a world of advantages available to you.

This is a story of my original note talking setup, a comparison between newer technologies, and how I am back to writing markdown in a folder.

Early in 2018, we were starting to play weekly, and my various documents in google docs were not cutting it.

I watched a couple of videos detailing how to Manage a D&D campaign with OneNote. The double categorisation setup where Sections contain many Pages was nice, the promise of links was promising, but unfortunately, the difficulty of creating them made them too slow to really be viable.

A year down the line, my OneNote looked like this: 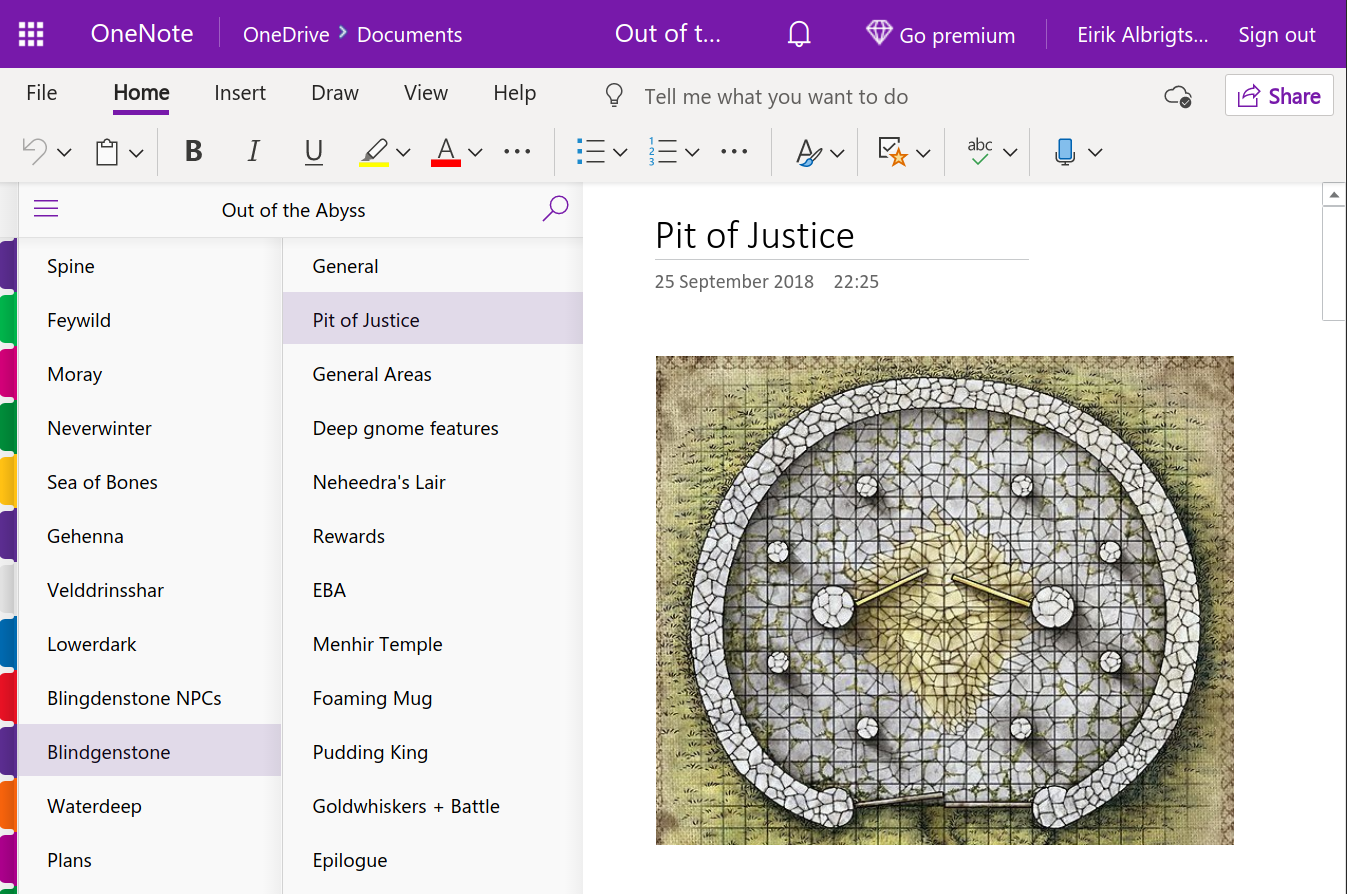 Still, image integration straight from a google search and into your document was great. Well, not Google, but Bing, I guess. In practice, I wasn’t always sure what I was going for, so I often ended up searching for images in my browser first via google, getting shunted to pinterest and find something promising there. Since OneNote returned completely different images, I generally had to save and upload my findings anyway.

OneNote did let you place random text fields anywhere on your page (like some kind of janky e-scrap book), and this did actually help get around one problem I was having:

splitting the data is hard in a browser

Why? You click on a link, the browser makes several HTTP requests, and after waiting 400ms you finally get to see the results (one drive is not super responsive), but this movement drops your place to the current page you needed to cross reference with. So now you either go back, and shift-click the reference so you now have two tabs that you can Shift-Tab between, or you prepare those tabs up in advance (typically before the session).

In practice I often ended up with a 30 tab browser window for every session, which generally, looked something like:

and their multitude meant I needed to tab between them to find the right one, only to have to change them when players did something out of left field.

DMs; does this happen to you?

So this system definitely had problems, but it was free, generally responsive, and the 400ms link opening time wasn’t too much of a drain on the improv. It was definitely noticable though, and it just took a slightly decreased OneNote QoS, or a few interrupted WIFI evenings, for it all to feel pointless.

..there was also a whole week where I was unable to save anything with no errors shown to me. I never get to the bottom of it, but it was the last straw.

After these problems, I realised that there’s one thing I’m unwilling to compromise on:

My notes must be available offline

If that means I have to do a full sync up front; fine. A folder of documents behind git solves this. This also solves the merge conflict resolution problem that OneNote was giving me due to the way it hid its synchronisation mechanism. Imagine arriving back at your desktop computer only to find that your laptop didn’t sync, so you either have to boot your laptop back up, or solve a merge conflict (with yourself) the next time you open your laptop (on an interface somehow worse than git). Not great.

Now I just git commit and git push, and never get a merge conflict.

That means that no matter how slick the following solutions look:

These solutions are off the table for me. Even if some of them might be a reasonable abstraction.

With an offline document repo, it was immediately easy to get back the basic functionality needed; categorised text in sections (folders) and pages (markdown files within folder), and an offline way to access them (cloned repo). 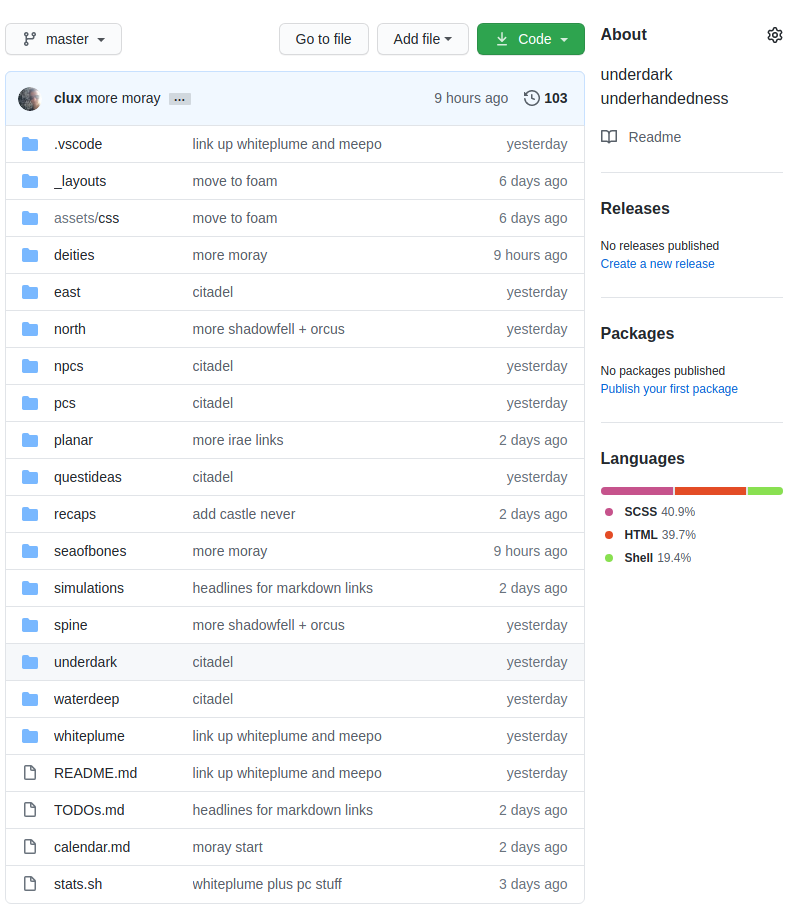 Using Markdown as the documention format is a no-brainer to me as a software engineer. This defacto documentation standard used nearly everywhere, supported by every major code editor.

Still, many of the same problems I had with OneNote still manifested themselves:

Now, none of these in theory were unsolvable. But was this something where homegrowing my own content management markdown system was really a smart way forward? After all, surely people writing books or research papers need some kind of system to keep track of everything, right?

There are probably millions of ways to organise your stuff and still be successful, just take a look at some famous writers’ desks:

Individualism notwithstanding, some methods are more refined than others. For instance, this article on sociologist Niklas Luhmann and his Zettelkasten system talks about one refined system. Do at least skim that article for why that solution is so powerful. It brings up some very important data modelling problem inherent to note taking:

All these methods on their own cause data to get lost, but using all of them at the same time gives you a stronger, self-reinforcing system. If Luhmann could achieve this with a simple slip box system of index cards, then making your editor do it should be childs play.

Though, why this system? Well, for one it’s an organic extension of what you already are doing. You don’t need to follow it entirely, but the benifits of links and connection notes are huge. From the principles listed in that article. Number 3 in particular:

Always link your notes Whenever you add a note, make sure to link it to already existing notes. Avoid notes that are disconnected from other notes. As Luhmann himself put it, “each note is just an element that derives its quality from the network of links in the system. A note that is not connected to the network will be lost, will be forgotten by the Zettelkasten”

This feels like good D&D advice as well. An NPC already known by a player can be a lot easier and more sensible to re-instate, rather than fabricate a slightly different version of one of your 10 existing characters. Need a “dark city”, but drawing a blank? Make a shadowfell version of of the same city and link them. Easier to remember for everybody. A campaign quickly accumulates a lot of information. No need to make this harder than it already is.

There is a zettelkasten plugin for sublime, but it looks pretty abandoned at the moment. It also does not seem to let you build a graph of your links (one of the main selling points of Obsidian).

The article by joshwin on how he uses obsidian to manage goals, tasks, notes, and more is interesting. A pre-configured all-in-one application that is flexible and powerful enough to let you handle all these different categories. Well worth looking into if you don’t have a good editor already. Their feature list is decent.

Personally, though, there are reasons why I’m not going for this:

While it looks like you can customize this scope-limited editor close to what you fancy, it does mean that you will need to do go through all that yet another time. Having battled with Vim/Sublime/VSCode and various editors over the course of my life, there was a point where I have started feeling satisfied with what past-clux had already configured.

The only provided linux install a single snap package. While snap might become a successful and perhaps the most prominent packaging distribution system on linux, it’s nowhere near that tipping point yet; especially on Arch. There’s no need for me to introduce an extra daemon to auto-upgrade packages when there’s already a solid system on Arch that lets me do this.

As with any another system bundling some pinned electron version, you now have yet another piece of software that will have security patches neglected as if development suddenly stops.

Sure, you can keep your data because you can store it wherever, but if they control the system that defines the format then it would be super annoying to have to do a migration to something else.

One way out of this would be to have custom plugins, but their plugin API is not exposed (though on their roadmap).

Ultimately, even if this eventually did get solved, I’d still rather go with a plugin system in a code editor I already know how to use, and backup, than to get locked in to something forked off electron where the development may stop at any time.

Another all-emcompassing standard that hasn’t really caught on as widely; orgmode. Looks a bit like markdown, but has a lot more support for things I don’t see an immediate need for. It seems kind of coupled with the emacs/lisp ecosystem, so if that’s your preference; check out org-roam. For me, this is a bit too off the beaten path.

We close with foam, the system we ended up using. Inspired by Roam (a system I neglected to talk about because of sync/offline problems, and it’s also not cheap).

While it does seem somewhat early stage, the selling point here is that Foam is really just a collection of VS Code extensions around markdown, that you can default-recommend at the repo level and configure how you want.

The main ones here are:

All of which are very popular, standard extensions, with the sole exception of the foam; a smaller looking extension that helps manage the wiki links. Frankly, it’s somewhat strange to me that they list the off-putting tolerance for alpha software as a requirement when most of their logic resides outside their codebase.

If you’ve dealt with a code editors plugin ecosystem before, this is a lot more welcoming than obsidian to me. Bug in the system? Well, probably one of the extensions. You’ve got options for dealing with it: report & wait, fork + fix, try other replacement extensions.

Oh, and I can we can swap out the default provided dark theme for one you like, e.g. Seti: 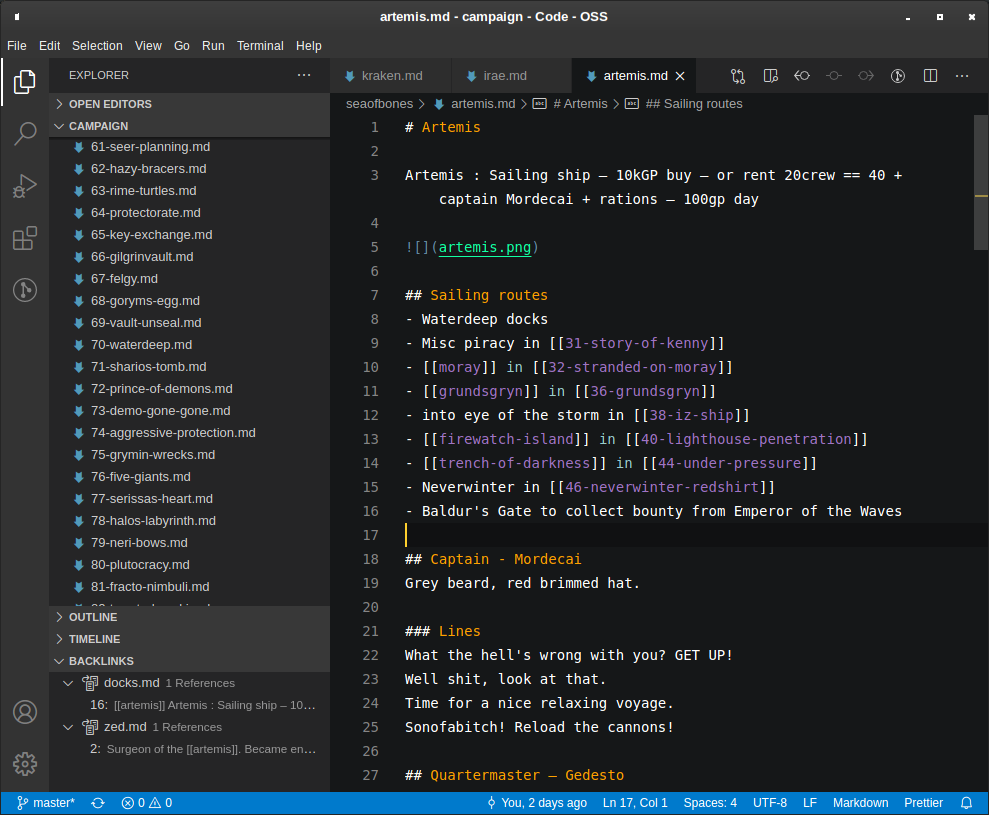 Finally, if you need extra functionality, you now have the whole wealth of the VS Code ecosystem at your fingertips.

So far, these have been useful addons for providing extra functionality:

So that was a lot of information about comparison of note taking technology. How does my system actually end up looking? Depends on whether I am editing or running a game. Here is a 3-way split between editing and showing the graph update live. 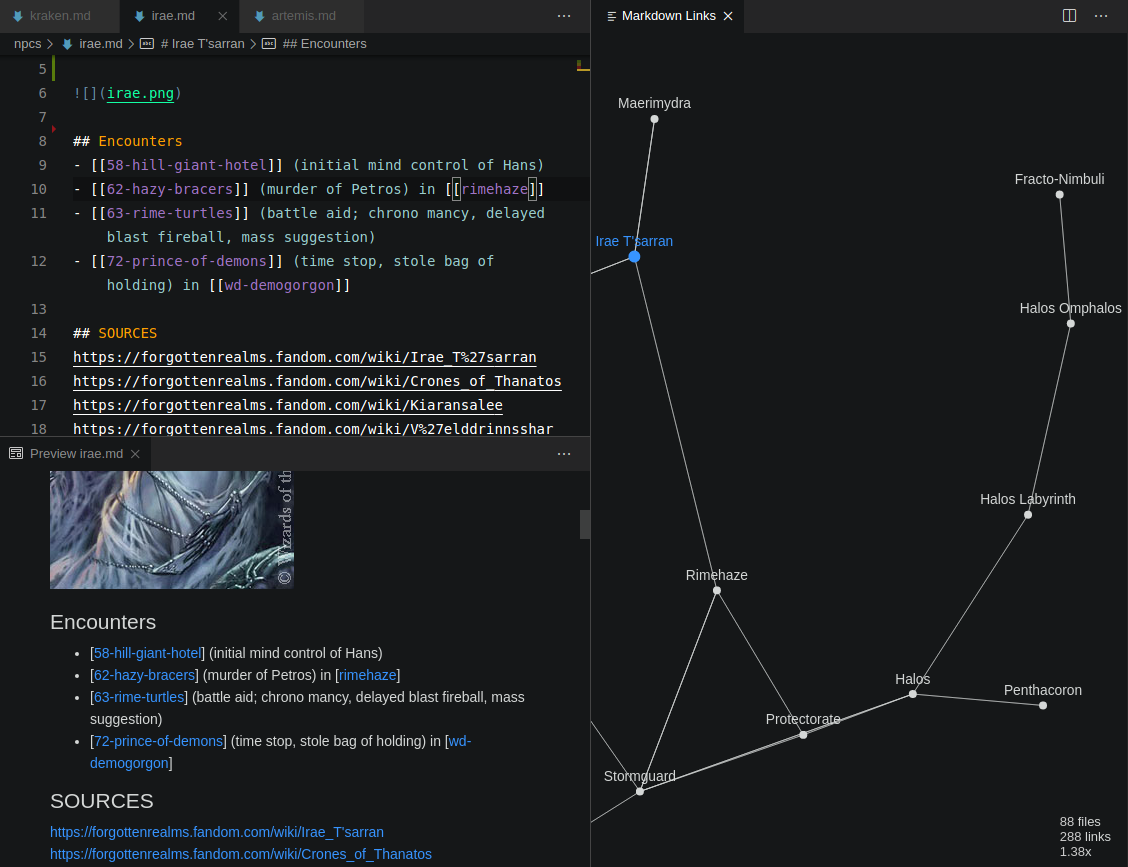 The graphs sometimes overlaps and rebalances awkwardly (help seems to be requested), but the naive implementation still help out a whole lot.

Here is a subset from our sea adventures aboard the Artemis: 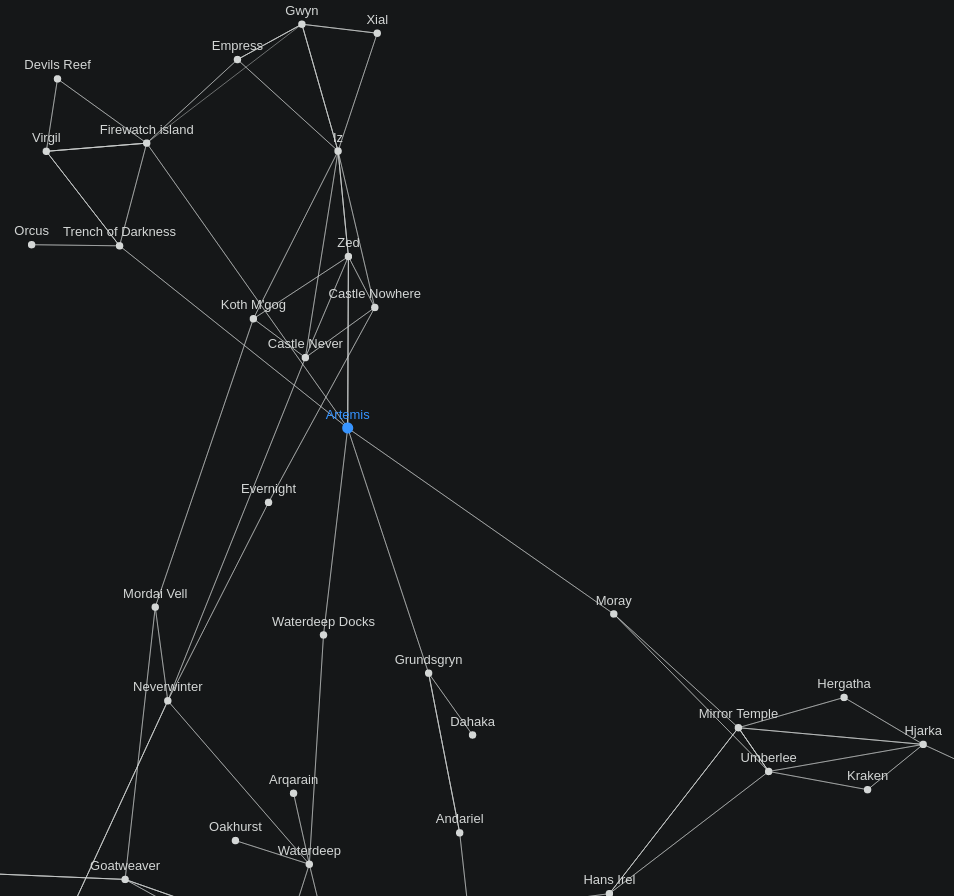 Most of the time I just straight up edit markdown in two groups. Sometimes with a preview or graph instead on the right or below, depending on what type of work needs focus. The flexibility of this system is equivalent to that of a popular professional code editor by inheritance.

Even if some of these plugins don’t evolve much, I see this as a pretty future proof setup (the why foam issue is also refreshingly honest). The investment in new tech is small, and migration cost away from said tech ought to be minimal.

From a RPG perspective, being able to immediately jump to anything through a responsive fuzzy search helps trim down on those "hang on one second" moments, and when you are planning by yourself, you have a whole linked compendium of knowledge.

The hope with all this is that the amount of hard-to-navigate “running the game tabs” should be significantly reduced with this setup, and my world should feel more integrated thanks to the extensive Zettelkasten style linking. Well. Fingers crossed anyway.