Despite having been a lazy Cinnamon customer since the Linux Mint days, recently some interesting benchmarks started surfacing about input lag in various Window Mangagers, and this made me want to experiment a little.

This is a log of stuff I needed to tweak to get LXDE working well.

LXDE is a free desktop environment with comparatively low resource requirements. This makes it especially suitable for use on older or resource-constrained personal computers such as netbooks or system on a chip computers.

Already had Arch Linux running LightDM as my Display Manager, so only needed the base install:

Then, logged out of cinnamon, and switched WM from the login screen to LXDE. Easy.

Tested this out immediately to see if it felt better. Funnily enough, I can only tell in certain games that require a bunch of precise inputs. Most of my other currently installed games felt the same. But they aren’t really twitchy enough to tell.

That said, Necrodancer definitely felt better. No longer any recogonizable input lag when playing Bolt or Coda, and had issues with those before on cinnamon.

To be able to use this at all, I need some keyboard shortcuts to move windows between monitors. I tend to use Super+Left and Super+Right.

It was quite akward to set this up with lxhotkey. The magical incantation (which took almost an hour to figure out) was:

No way to bind Super to open the main menu AFAIKT, and man, that was hard to unlearn. Not that it matters, because there’s no fuzzy start and type on the main menu anyway. Amazing how tied you get to that. Not sure I can deal with not having that now. Maybe there’s some kind of fzf panel type thing I can install?

Missing out of the box

Screensaver button kept spinning, timing out. Turns out xscreensaver was not installed. Installing it fixed it, but it also pulled in like 15 perl packages, and looked absolutely awful.

Ended up installing slock straight from pacman instead. No dependencies there, and it’s one c file. No user input. Just a tree color screen. Black when locked, blue while typing, red on wrong password.

Didn’t have to actually write slock anywhere. It just worked after installing it (lxlock apparently figures this out). I had taken out the broken xscreensaver ref in ~/.config/lxsession/LXDE/autostart anyway though.

This is kind of necessary for me for any terminals as I frequently overlay them on code with ~70% opacity. Installing xcompmgr straight from pacman and adding xcompmgr & to ~/.config/lxsession/LXDE/autostart fixed it.

Needed about 15 minutes of configuration, and it ended up being stored in a 129 line file in ~/.config/lxpanel/LXDE/panels/panel But ended up looking very nice. Transparency on the bar itself was a nice touch. 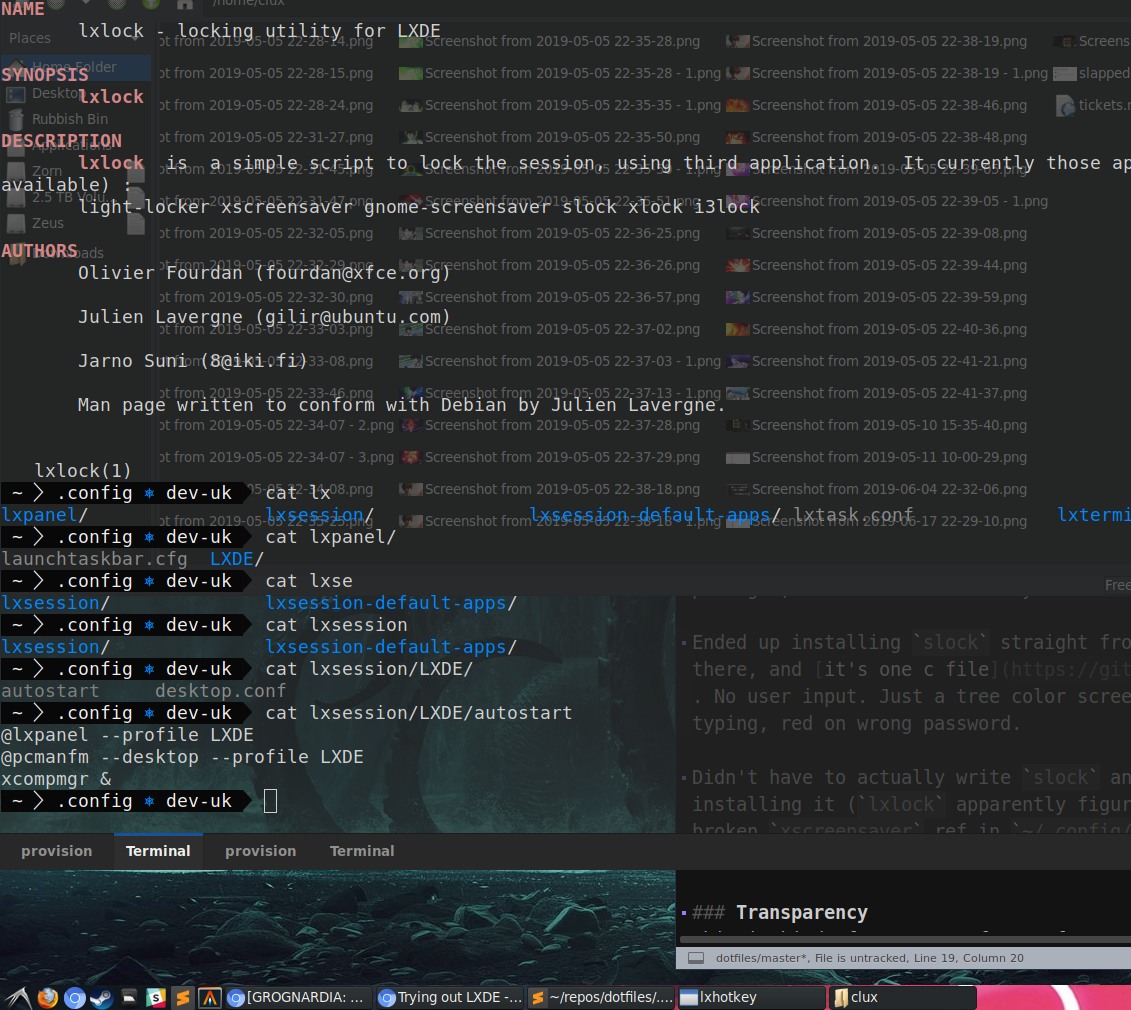 Though you can see that it gets confused if you have set a different background on each monitor, which is something you can do for some reason.

Fine, could make it look like nemo in 5 minutes. You can see it in the background above. Had it’s config in a tiny: ~/.config/pcmanfm/LXDE/pcmanfm.conf.

Default theme is quite ugly due to the overly glossy black panel, so you probably have to that transparent anyway. Everything kind of only fits the dark theme IMO. Went for the only decent one: Adwaita-dark, but put on Mikachu window borders. Nothing amazing, but completely fine.

Tiny file in ~/.config/lxsession/LXDE/desktop.conf controls this.

Articles exist online on how to install themes for it, but that’s probably the gtk3 version. The few I tried didn’t work.

The most awkward thing is the lack of a launcher bar so far. Performance is great. Keybindings are mostly workeable. If some better tiling-like commands can be set up maybe you can make do with alacritty.

Seems completely useable. Most configs stashed in this PR.