Fighting a CR 13 Vampire at level 7 in total darkness is no easy feat.

As part of an emergency backup adventure (EBA) in the middle of a long running D&D campaign, our largely chaotic party of misfits (save for our low int paladin whose deity has yet to be named in his backstory) was given the poem that leads them into (and helps them navigate) White Plume Mountain: 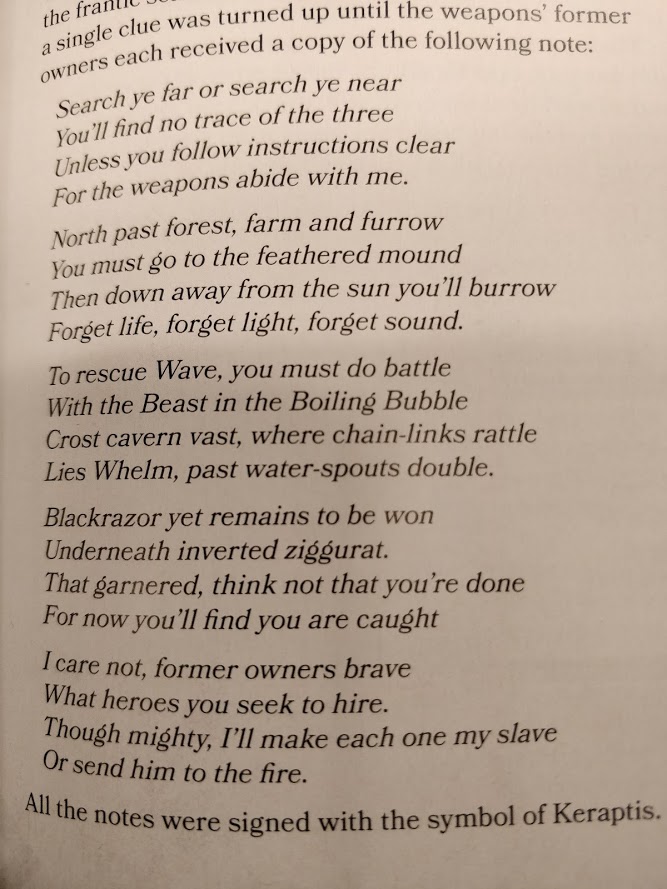 It’s a classic dungeon, revamped for 5th edition in Tales from the Yawning Portal and features three major pathways, boss fights, and major sentient weapons as the attracting carrots.

It’s also incredibly dangerous. It’s designed for a party of 8th level characters, and often recommended as weekend interim game to give people a breather from your regular campaign, because of the high likelihood of a total party kill.

However, what’s the point of getting three legendary weapons if the one shot is then over? High reward makes even the most careful players willing to confront high risk scenarios, and that can make for a really interesting dungeon crawl.

I may also have been caught slightly unaware when rereading the boss battles after having lead my 7th level adventurers into the first corridor of this dungeon..

Regardless. This dungeon seemed like the perfect match for my stunlock heavy, very tactical party of control characters with good equipment.

A Vampire hidden in complete magical darkness, with a strong magical charm that he can perform every round, that does not require concentration, nor allow repeat saves.

This encounter was unlike anything the party has faced before. All previous bosses had been either tashaed by our trickster, stun-locked by our monk, or chain-held by our Paladin + Warlock/Sorcerer. But with three legendary resists, high natural saves, and difficulty hitting, only one of these even needed to be spent.

One of the reasons for that is that you don’t just start a battle like this without some buildup.

Why would the vampire want to just start the battle on even ground? Sitting on 17 INT and 18 CHA, he’ll want to get in your heads so that he can get a charm off early. And with legendary move actions, he can simply jump around and can generally dodge attacks from any over-eager party member while he attempts to persuade the party.

Well, I would pardon my manners, but it would appear you’re the ones who walked into my bedroom.

Then, when the party starts to suspect this may not be a combat encounter, you lean in to one of the heavy hitters and whisper while revealing your face (a condition of the charm to work):

You’re clearly the strongest one in the group. Don’t you think this would be much easier without the pointless bloodshed? Protect me and we will all get along very soon.

Let’s all roll for initiative.

A game of charms

By the end of round 1, the one attempt to dispell the magical darkness had failed, and another party member had been charmed by Ctenmiir (i.e. 2/4), all while he easily kept himself out of harms way. It did not look good.

Satisfied with the situation, the vampire began feeding on the remaining members. HP drain on the rogue. Warlock down to 8hp. Some hits were taken during the process, but no cause for alarm for the vampire.

Then, having exhausted all spells that caused saves from the vampire (which he could just legendary resist), the warlock went down a different route:

He cast Suggestion, Twinned on the two charmed characters with the instruction:

You have been charmed by the vampire. Do not listen to him; fight him instead.

Well within the restrictions of the spell. Paladin, Fighter: Make wisdom saving throws against the warlock’s spell DC. More failures.

Thus, an interesting equilibrium point was reached. Two players still charmed by the vampire, but one warlock concentrating on maintaining the suggestion to counteract this effect.

On cue, Ctenmiir jumps into the face of the warlock to try to break this concentration. Reaction Shield defense is successful. Party gets to now wail on the increasingly frustrated vampire.

Paladin comes in with a Branding Smite to force the vampire to be permanently visible, and stop regenerating. It’s just a question of time before he goes down.

Ctenmiir makes a final crucial attempt to charm the warlock. If successful, the warlock would have to drop his concentration on his twinned suggestion to protect the vampire. Thus, the total number of charmed party members is either 0/4 or 3/4, depending on one wisdom save.

The vampire is dispatched over the course of the next round, and his treasure is claimed.

As a DM, this was one of my most memorable battles so far. So much rested on this insane combination of charms, and it could easily have ended in a TPK.

If anyone’s deserved their new sentient warhammer, it’s them.

As an amusing sidenote; at one point, the rogue history checks for knowledge of vampires (poorly), but still persuades the charmed paladin to “heal” the vampire.

The vampire returns to full health. 😆

A metagaming attempt halted on by a fourth-to-fifth edition confusion. Karmic.